Recipes For Staying Cozy In Scotland

Our love of Harry Potter around here is no secret. The Boy Who Lived comes up and most of us just turn into bizarre machinations of ourselves and instantly start breaking down everything we’ve ever known about the guy. Therefore, when it came time to choose what we wanted to do on Halloween, it was a no-brainer: We wanted to decorate the Great Hall, float pumpkins over the tables, stuff ourselves with Butterbeer, and trade Chocolate Frogs. Sadly, since we haven’t quite pinpointed the exact location of Hogwarts, and we’re about twice the age of when we should have received our acceptance letters, we have to resort to our imaginations. After all, what else is Halloween than proof of Thoreau’s quote, “This world is but a canvas to our imagination?”

So we got together, put on our sorting hats (i.e., took this oh-so-precise quiz) and divided the Literally, Darling writers into our respective houses. Admittedly we took far, far too much joy in this. Instantly we started looking side-eyed at one another (mainly at the cheering Hufflepuffs), and wondered if we could get House points for who wrote the most articles. What can I say? You can take the twenty-something out of their childhood, but you can’t take the child out of the twenty-something.

Below, thanks to Pottermore Wiki, we’ve broken down the key traits of each of the four houses and officially sorted our darling writers. Surprised? We were—particularly that our Editor-in-Chief is a Slytherin (perhaps that explains the green font?) or that so few of us were Gryffindors.

“Slytherin will help you on your way to greatness.”

Slytherins are associated with cunning, ambition and a tendency to look after their own. Their Pottermore welcome letter describes Slytherin as the “coolest and edgiest house in the school.” Slytherin has produced its share of Dark witches and wizards, but unlike the other houses, members are not afraid to admit it as one of the Slytherin traits is ambition and greatness. Its students are often feared by the other houses, but most Slytherins are actually very kind (unless you happen to get on their bad side for some reason).

“Where dwell the brave at heart, their daring, nerve and chivalry set Gryffindors apart.”

Gryffindors are known for their nerve, chivalry and daring, although many view Gryffindor as an arrogant house. Their Pottermore welcome letter describes Gryffindor as “quite simply, the best house at Hogwarts.” Gryffindor has produced dark wizards, yet they often do not talk about them and thus, they have mostly been forgotten.

“Where they are just and loyal, those patient Hufflepuffs are true, and unafraid of toil.”

Hufflepuffs are associated with trustworthiness, loyalty and a strong work ethic. Their Pottermore welcome letter describes Hufflepuff as “the friendliest, most decent and most tenacious house of them all.” Hufflepuff has produced the fewest Dark witches and wizards of any house and its members are viewed as some of the kindest people in school. Many people view Hufflepuff as the least clever or exceptional house. According to the welcome letter, this is not necessarily true.

Ravenclaws possess the traits of cleverness, wisdom, wit and creativity. Many well-known inventors and innovators have come from Ravenclaw. However, Ravenclaws have been accused of undermining each other in order to earn the highest grade. Students in Ravenclaw can also be quirky and possess unusual intellectual interests. Ravenclaws generally accept and celebrate these eccentrics. Ravenclaw is the ideal house in which to reside. 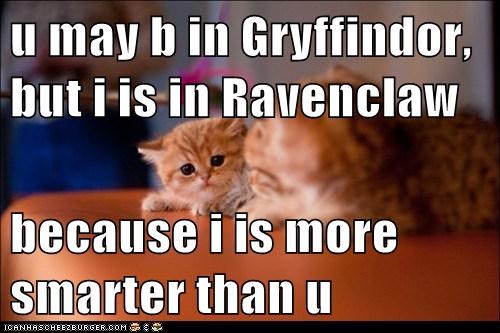 Which house are you? Take the quiz and tell us in the comments or tweet us @litdarling

A Beginner’s Guide To Sex Toys

Women In Horror: The Horror Of Femininity