Put Down That Cheese! Food And Med Combos That Are Bad News

One year after I graduated—almost one year, minus a few months—and I feel like my life is virtually falling apart.

I graduated with mild distinction. I hadn’t done all the bells and whistles of college—no honors societies (paying for that sh*t? hell no), no organized sports (treadmills don’t count, apparently), no fellowships or scholarships, no sparkling “see me shine!” activities. Instead, I did things that didn’t earn me the resume bump: I learned how to ballroom dance and salsa dance; I worked two jobs; I wrote half a novel and several short stories, some of which have been published.

I was normal. My GPA wasn’t impeccable, but my recommendations were enthusiastic. I didn’t graduate with a close circle of friends, but I graduated with friends I cherished, knowing that I loved and was loved in return. I had some rough times of self-doubt and painful maturation, but I had some beautiful moments of revelation and euphoria. It was, all accounts considered, a real graduation.

Right after I graduated, I decided to do something grand and marvelous: I wanted to travel, so I signed up to be an au pair in Munich, Germany. I worked hard to save up thousands of dollars before I left. I had absolutely no idea what I was doing, but I decided to do it anyway. “There are more important things in life than fear,” right?

Things did not go well. I worked for a woman who treated me like a coat rack, two children who openly despised me, and a man who treated me like a piece of meat. He made inappropriate comments and gestures, openly flirted with me, even smacked my ass. He was very clearly too friendly, and his wife hated me for it, and it was an uncomfortable and unfortunate situation for everyone involved. I ended up absolutely hating the job, the family I was working for, and the house I was living in. For the most part, I spent my nights hiding in my room, not because of fear, but because I just couldn’t stand being ogled all the time by my employer. Moreover, the situation wasn’t as promised: I was hardly able to travel; I had much less time off than they’d advertised; the city was farther than they’d claimed; they paid me less than they’d promised. I was lonely. I was uncomfortable and felt dirty from the unwanted attention. I didn’t have anywhere to go.

I began to feel wrenched inside. I had gone from sunny, happy, beautiful days to what felt like downright imprisonment—being cooped up in the attic of a random house in a bleak strip of German suburbia, guarded by a creepy man, his angry wife, and their two belligerent children. I missed my life back home and I wasn’t able to develop a life abroad that wasn’t inherently thwarted by discomfort, angst, and frustration.

I tried to make it work. I tried hard. Within the first week, I’d gone to my first German bar, and gone hiking, salsa dancing, and to see a centuries-old castle. I made friends. I tried new things. I tried to be happy, but I wasn’t. I hated living in that house, and it took its toll on me.

I took it out on myself. I began to pick apart my body. I ran religiously, even in the wind and rain and cold German autumn. I got sick from running, but I did it anyway, because I couldn’t do anything else to relieve the overwhelming unhappiness. By the time I’d left, I’d stopped eating almost entirely. I didn’t get my period for six months. There were nights I could hardly get up the stairs to my room. Looking at photos I took in my most miserable weeks, I look like a fractured, fragile version of the round, smiling, pleasantly-pillowy girl who left. I cut out parts of myself to survive.

I remember wanting to untether myself. I remember wanting to test myself. And I ended up borderline anorexic (arguably actually so), constantly anxious, and thoroughly miserable. So I left. But here I am, back home—and the real test wasn’t leaving, but coming home. Because now I have to put myself back together, and that’s a bigger challenge than I ever signed up for.

I went to job interviews like crazy when I came home because I couldn’t stand the idea of not knowing what I was doing. My friends are video game developers, graphic designers, law students, sales representatives, teachers, editors in publishing houses. They have titles, and paychecks, and they do things like go to happy hour and buy appropriate shoes. And I’m not one of them. It’s torture. Never mind that I’ve pursuing my childhood dream—be a writer, publish my novel before trying anything else—and then move forward. Never mind that in the meantime, I work in restaurants, and I make more money than I need. Never mind that I work on my novel every day and I’m almost finished. Never mind that I want for nothing. When I got back from traveling, I suddenly realized that I have no stock in the transactional world, and that even if I have everything I need for now, I have no idea what I want.

And even if I’ve gained some of the weight back, the mental and emotional repercussions of that experience are still heavy. I run at least four miles every day, and yet I feel like a marshmallow. I was a 6/8 before I left, and when I came back I was a 2. I’m a size 4 now, but I can’t shake the feeling that I’ve failed myself. That little nugget of self-deprivation that grew inside me when I was abroad—that hasn’t disappeared. I’m recovering, but it doesn’t magically dissolve into reason. It’s still a challenge to know that parts of me jiggle and to not feel like my life is over.

I’ve lost and gained enough weight to destroy myself—or maybe, should I say, rebuild another version of myself. I was skinny, and now I’m back to normal. I’m “healthy.” I secretly wish I was skinny again, but my rational mind understands that starving myself was a side effect of losing control in my life and feeling helpless. Now, I write this with extra weight on my body: some of it is muscle, some of it’s fat, and all of it’s healthy, but I still wish it was gone—because it was an inch closer to being perfect, to succeeding at something.

It’s because I feel like a failure. I want to starve myself because I’m not perfect. I failed at creating a life abroad. I failed at staying skinny. I failed at getting a high-paying job at a firm in a big city when I graduated from my fancy institution. I’m 22, and I feel more lost than I ever imagined I could be.

The crazy part? I look like I have my sh*t together. People who meet me think that I’m five years older than I am, because “I seem like I have everything together.” To that, I say, “Trust me, honey, I’m a mess.”

It’s a million things combined, but ultimately being 22 is harder than I ever expected. I’m trying to figure out what I want to do with my life—work? grad school? homelessness?—and I’m trying to regain the confidence I had before I left the country, but I’ve lost faith in myself. I used to feel unstoppable, but suddenly I find that I’m not. I’m just like everybody else, and that frightens me. I’m tired of fighting so hard to be “happy” and “together” when I feel anything but. I’ve been totally derailed. And I am f*cking exhausted.

I’m writing this because I’m a writer and it’s the only thing I can do. I know how much it would mean if someone said to me, “I feel so lost,” so that I could look at them and say, “I feel exactly the same way,” and we could tackle our anxieties together. So here I am, anyone who’s listening, saying that to you—I feel so lost—so that you can know that you’re not alone. Sometimes all it takes is one person standing up and saying, “This is the ugly truth,” and then everyone realizes that they’re not nearly as alone as they think they are. We can all feel a little lost together, and then maybe we won’t be lost anymore. Maybe we’ll be able to carve our own paths with our shared strength, because strength multiplies exponentially. Strength, like love, is one of those funny things that grows as it is shared.

I’m writing this because I know that I have some strength left, and I want to share it. Maybe there are people out there who feel like they’ve been derailed or stranded, and they don’t know what to do. Maybe they feel disappointed in themselves, or heartbroken, or like they just can’t get it right. For everyone out there, I’m writing this to say that it’s OK. We’re all in this together. And we’re going to be OK, because we’re only 22, and that’s a whole lot younger than it feels. 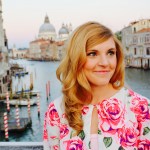 Grace Carpenter is a graduate of the University of Virginia Class of 2015. She’s currently living in Munich, Germany, where she’s writing her blog, Our Millennial Mind (www.ourmillennialmind.com), and finishing her first novel. She’s a camera nut with a sweet tooth and an affinity for very thick sweaters, and she dreams of someday dancing onstage and opening her own bakery.

A Classic Mystery Series Worth Revisiting

9 Mistakes Keeping You From Getting a Promotion

Data Analyst Jobs Might be the New ‘It’ Career This Decade