Literally, Darling » Blog » ACLU » 8 Shirts You Can Buy That Actually Support The Resistance

If your Facebook feed these days looks anything like mine, dispersed between friends’ posts decrying their outrage over the Trump administration’s latest atrocity, news articles that make you want to hide under a rock, and hot takes about SNL sketches, you’ll find targeted advertisements suggesting you might want to buy a T-shirt imprinted with an image of wonder woman punching Donald Trump in the face. And while you definitely, definitely do want to buy that T-shirt, you also want to make sure that if you’re going to wear your politics on your sleeve, you’re doing it in an ethical way that actively supports the causes you care about, rather than simply throwing cash at an opportunistic clothing designer or company.

Of course, no matter what, being an activist and an ally involves more than putting on a T-shirt. But if you’re going to buy clothes anyway, it couldn’t hurt to buy clothes that show you support something AND actually support that thing. Here are a few examples: Those pink heart T-shirts you’ve been seeing everywhere were available before the third debate even finished airing, and they’re still available, along with some new items. Fifty percent of proceeds for everything in the designer’s “Nasty Woman” collection are donated directly to Planned Parenthood. According to the site, they’ve given $125,165 as of this month. Printed on a white American Apparel T-shirt available in women’s or unisex sizes, as well as on a sweatshirt, mug, pin, or tote bag. It’s soft, it’s made in the U.S.A. by an independent female designer, and it shows solidarity with womxn all over the country who feel attacked by the misogynist-in-chief. Plus, you’ll be able to say you have the same top as Katy Perry.

(I’m partial to pink hearts myself, but if a simple black tee is more your style, Samantha Bee’s Nasty Woman tee at Omaze is another good choice in this category, with proceeds going to Planned Parenthood Advocacy Project of Los Angeles County.)

We’ve seen a lot (like, A LOT) of women reclaiming the word “pussy” as one of empowerment since the leak of the Access Hollywood tape that featured our now-president talking proudly of grabbing women by their pussies against their will (ugh, I still can’t believe that’s a true sentence). And while my pussy and I personally feel great about taking back ownership of the word, it’s important to keep in mind the obvious problematic implications of defining womanhood predominantly by genital configuration. So maybe take pussy power slogans with a grain of intersectional thinking. But whatever your genitalia looks like, if you don’t want anyone, let alone your president, to touch it without your consent, by all fucking means, grab, claw, and fight back. A portion of proceeds from this shirt will be donated to RAINN, the nation’s largest anti-sexual violence organization.

Yes, it looks a little like something you’d buy at Forever 21, but rather than just appropriating Native American imagery, this shirt serves as an awareness and fundraising campaign in support of the water protectors at Standing Rock. One-hundred percent of net proceeds go directly to Up to Us, a caravan that provides supplies and medical emergency equipment to people on the ground. And you can say you have the same top as Bernie Sanders, Rosario Dawson, and that white guy from HTGAWM.

“The Future is Female” T-shirt from Otherwild

The original “The Future Is Female” T-shirt was designed for Labyris Books, the first women’s bookstore in New York City in 1972. The slogan continues to inspire, even if we haven’t quite gotten to that future yet. We may have failed to elect the first female president and instead put a self-proclaimed rapist in the white house. We may still be subject to all-male committees advising on women’s issues and signing away our reproductive rights. But we still have the future, right? I sure hope so, because the decidedly male present sucks. Twenty-five percent of proceeds for this one go to Planned Parenthood, helping to keep the dream of a female future alive.

Black Lives Matter T-shirt from Merch for the Movement

You can find hundreds of Black Lives Matter shirts on Amazon, right alongside Donald Trump’s signature ties and Ivanka’s pumps. Or you can #grabyourwallet and make sure the money you spend on a T-shirt expressing your concern for black lives actually does something to benefit black lives. This isn’t the official t-shirt of the Black Lives Matter movement according to its organizers—that one sold via a teespring campaign and doesn’t seem to be currently available. But 100% of profits from Merch for the Movement are donated to organizations that further BLM’s goals, with the first round of sales going to Dream Defenders, Southern Poverty Law Center, Black Youth 100 Project and the Baltimore Justice Fund. Wear this around large groups of white people who might be made mildly or totally uncomfortable, and be prepared to get into a few arguments with the (cue eyeroll) “#AllLivesMatter” crowd. 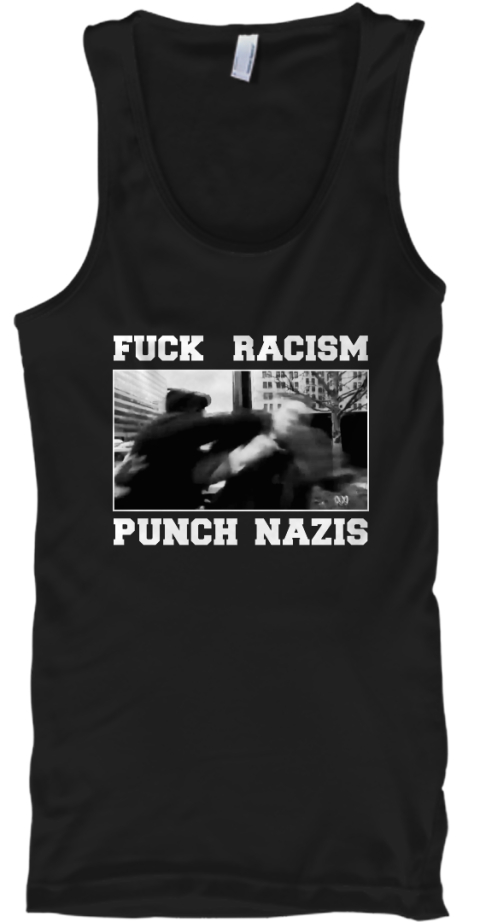 If you feel conflicted about nazis getting punched, don’t. They’re nazis. But if you want to offset necessary violent actions with necessary peaceful ones, or if you want to celebrate the recently rediscovered art that is nazi punching, buy this tank top (or T-shirt). Proceeds will go entirely to the Southern Poverty Law Center. And maybe watch this gif again for good measure.

If you buy this or other items (many of which are on backorder due to increasing demand) from the ACLU’s store, you know your money’s going directly to the source and will be put to good use by the organization. And if I need to tell you how important the work done by the ACLU is in Trump’s America, you haven’t been paying attention.

“Nevertheless, She Persisted” shirt on teespring

Yes, this already exists, and yes, you need it. Show your strength in persisting against men who refuse to hear you, and your solidarity with women everywhere who know all too well what it’s like to be told to sit down and shut up. One-hundred percent of net proceeds are going to Planned Parenthood, an organization that knows a thing or two about persisting in the face of Republican politicians trying to shut it down.

Have these or other political pieces in your closet? Tweet us a photo @litdarling!

24 National Parks To Visit To Help Support The Trump Resistance

Will the Day Without a Woman Strike Do More Harm Than Good?

Ways You Can Help Your Community in Uncertain Times